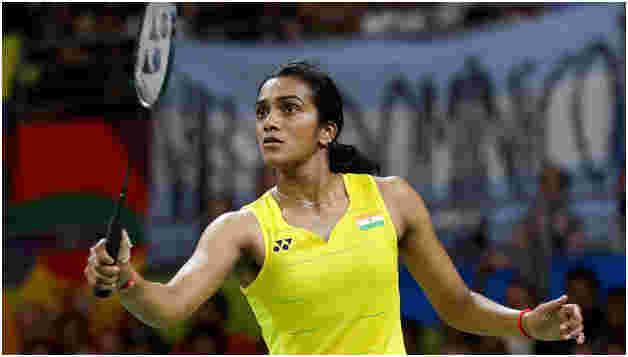 When we watch Pusarla Venkata Sindhu hitting those speedy strokes and cross-court returns, we might not realize that the same person once thought of becoming a doctor. The inspiration behind this was Sindhu’s elder sister, a national-level handball player who gave up the sport to pursue medicine. Nonetheless, Sindhu chose badminton and it bore fruit for not just her but an entire nation, as she became India’s first badminton player and female athlete to win a Silver medal at the Olympics. Such a career story is bound to be full of successes and sacrifices, which include Sindhu missing her class X board exams and her sister’s wedding for badminton events.

Was Born to Parents Who Played Professional Volleyball

Sindhu’s parents were both volleyball players, with her father being an Arjuna Award recipient for that sport. Her sister was a national-level handball player who eventually gave up her sporting career to become a doctor. Sindhu took up neither volleyball nor handball, as she was inspired by the success of Pullela Gopichand at a young age. Little did she know that Gopichand would become her coach in two years and take her to an Olympic medal victory.

Drew Inspiration from Gopichand and Started Playing Badminton at Age 8

Gopichand’s victory at the 2001 All England Open Badminton Championships, the world’s oldest annual badminton tournament, inspired Sindhu to pick up the badminton racquet. As a child, she did not get much chances to play with the senior players, so she was advised by renowned badminton coach Mehboob Ali to do wall practice “till the paint peeled off.” 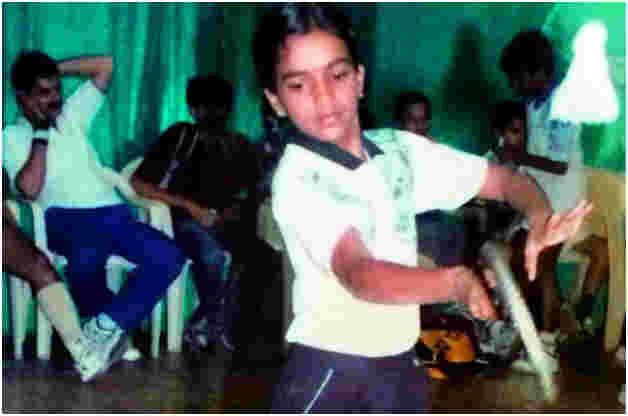 Got Trained from Several Renowned Coaches including Mehboob Ali

Sindhu learned the basics of badminton in the courts of the Indian Railway Institute of Signal Training and Communications in Secunderabad, under the guidance of coach Mehboob Ali. She was also trained by other renowned coaches, including S. M. Arif and Govardhan Reddy. Sindhu started playing and winning major tournaments before she turned 10. In the under-10 category, she won the 5th Servo All India Ranking championship (in doubles) and the Ambuja Cement All India Ranking event (in singles).

Gopichand Persuaded Sindhu’s Parents to Enrol Her in His Academy

In 2005, the 10-year-old Sindhu caught the eye of national coach P. Gopichand, who convinced her parents to get her enrolled at the Gopichand Badminton Academy in Gachibowli, Hyderabad. Gopichand believed in Sindhu’s potential and planned to use her height as an advantage, for which he invited trainer Christopher Paul to his academy to create a training regimen for Sindhu. Paul worked on her muscle strength while Gopichand worked on her speed and agility.

Commuted for 4 Hours Everyday to Juggle Training and Schooling

A regular student till class 8, Sindhu studied at the Auxilium High School, Hyderabad, that was supportive of her sporting endeavours. Sindhu’s father used to drive her from Secunderabad to Gachibowli for her training, while she took naps in the backseat. Besides attending school, completing school work and getting trained, Sindhu spent four hours everyday on commute and it began to take a toll on her. When her parents made Sindhu join the academy hostel, she started missing her home to an extent that it affected her performance. Finally, Sindhu’s family moved to Gachibowli in 2010.

Sindhu’s grit and perseverance, along with her parents’ support and Gopichand’s mentorship, started getting her widespread recognition at the domestic level. In the under-13 years category, Sindhu won the singles title at the Sub-Juniors in Pondicherry, and doubles titles at the Krishna Khaitan All India Tournament, IOC All India Ranking event, Sub-Junior Nationals and the All India Ranking tournament in Pune. In the under-14 category, she won the team gold medal at the 51st National School Games.

Badminton had always been the first priority for Sindhu. When she missed taking her Class X board exams, she gave them the next year in the supplementary section. After graduating from school, Sindhu pursued her Bachelors in Commerce from St. Ann’s College, Hyderabad. As she didn’t attend classes at college and only took the exams, Sindhu couldn’t make much friends. Shifting to Gachibowli had made her lose touch with most of her school friends too. Most of her friends today are her fellow players at the Gopichand Academy.

Clinched the Silver Medal at the 2010 International Badminton Challenge

Sindhu played her first international tournament at the 2009 Sub-Junior Asian Badminton Championships, where she won the bronze medal. She lost to the second seeded player at the 2010 Junior World Championships to reach the quarterfinals. Sindhu later won the match with Carolina Marin from Spain to finish fifth in the tournament, and also qualified for the 2010 Youth Olympics to be held later that year. She won the silver medal at the 2010 International Badminton Challenge in Iran, and also found a place in India’s national team at the 2010 Thomas & Uber Cup. 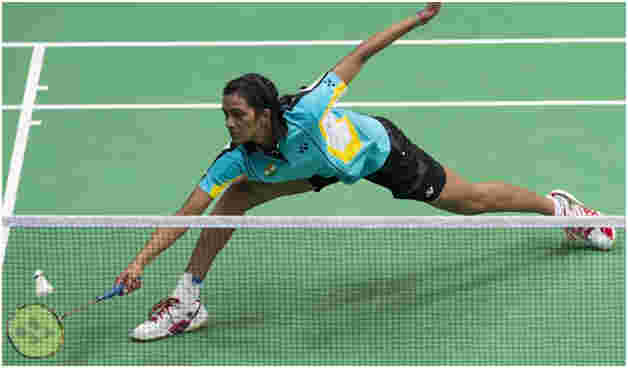 Sindhu playing the bronze medal match at the 2014 Commonwealth Games

After winning the 2012 Asia Youth Under 19 Championships, Sindhu defeated Chinese shuttler Li Xuerui (who had just won the gold medal at the 2012 London Olympics) to enter the semifinals of the Li Ning China Open. However, she lost to another Chinese player in the final, and also had to skip the 2012 World Junior Championships due to a knee injury. Sindhu missed her sister’s wedding in Hyderabad to participate in the 2012 Syed Modi India Grand Prix Gold event in Lucknow. She didn’t lose a single set before the final and finished as the runner-up, taking her world rank to 19.

Received the Arjuna Award at a Young Age of 19

On turning 18,  Sindhu got employed with Bharat Petroleum as an Assistant Sports Manager. She won her first Grand Prix Gold title at the 2013 Malaysian Open, and also became India’s first medalist in women’s singles at the 2013 Badminton World Championships. Sindhu ended the year by winning the 2013 Macau Open Grand Prix Gold title, and was honoured with the Arjuna Award by the Govt. of India. This was a very special moment for Sindhu as her father had won the Arjuna Award for Volleyball after a very long time into his career.

Won the Bronze Medal at the 2014 Commonwealth Games in Glasgow

In 2014, Sindhu clinched the bronze medals at three major events — the Asian Games, the Glasgow Commonwealth Games and the World Badminton Championships. She became the first Indian to win back-to-back medals at the World Championships. Sindhu was named as the FICCI Breakthrough Sportsperson of the Year and NDTV Indian of the Year in 2014. In March 2015, she became the youngest recipient of the Padma Shri award, one of the highest civilian honours in India. Later that year, Sindhu won her third successive title at the 2015 Macau Open Grand Prix Gold event 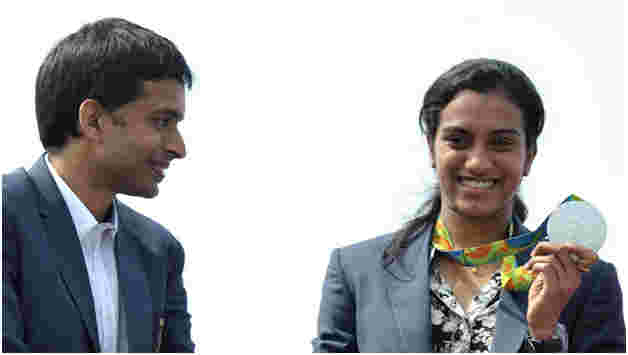 P.V. Sindhu with coach P. Gopichand and her silver medal from the 2016 Rio Olympics

Sindhu started the year with a bang by winning the 2016 Malaysia Masters Grand Prix Gold title. At the 2016 Rio Olympics, she became the first Indian badminton player to reach the finals, after defeating World No. 6 and World No. 2 on the way. Sindhu could not win the final against the World No. 1 player, Carolina Marín from Spain, but won a billion hearts by winning the silver medal for India. She made history by becoming India’s youngest athlete, first female athlete, and first Badminton player to win the silver at the Olympics. Thankfully, she’d decided to not become a doctor when she was young.

Along with cash rewards from various Indian state governments, Sindhu received rewards from the Ministry of Youth Affairs and Sports, the Badminton Association of India, the Indian Olympic Association, and her employer Bharat Petroleum. She was also promoted to the post of Deputy Sports Manager. In August 2016, Sindhu was conferred with the prestigious Rajiv Gandhi Khel Ratna Award along with other Indian success stories at the Rio Olympics, including bronze medalist Sakshi Malik.

What We Can Learn from PV Sindhu’s Career Story

This story reminds us of the quote by American actor Scott Caan — “Good things happen when you get your priorities straight.” Sindhu is known today for her success in the game of badminton, because it had been her top priority since the very beginning. She missed her class X board exams, her sister’s wedding ceremony, and even the award ceremony where she was supposed to receive the Arjuna Award, because she put badminton first in all three cases. Sindhu always knew (or had her parents and coaches to let her know) what really mattered in the long run. Her parents played a major role in creating all the conditions for Sindhu to get going with Badminton, in spite of being national-level Volleyball players. And the mentor who played the greatest role in enabling Sindhu to become an Olympic medalist was Pullela Gopichand, the same person who inspired up to pick up the badminton racquet in her childhood.