“Every dream takes time so you just have to keep at it and someday it can come true.” — Sania Mirza 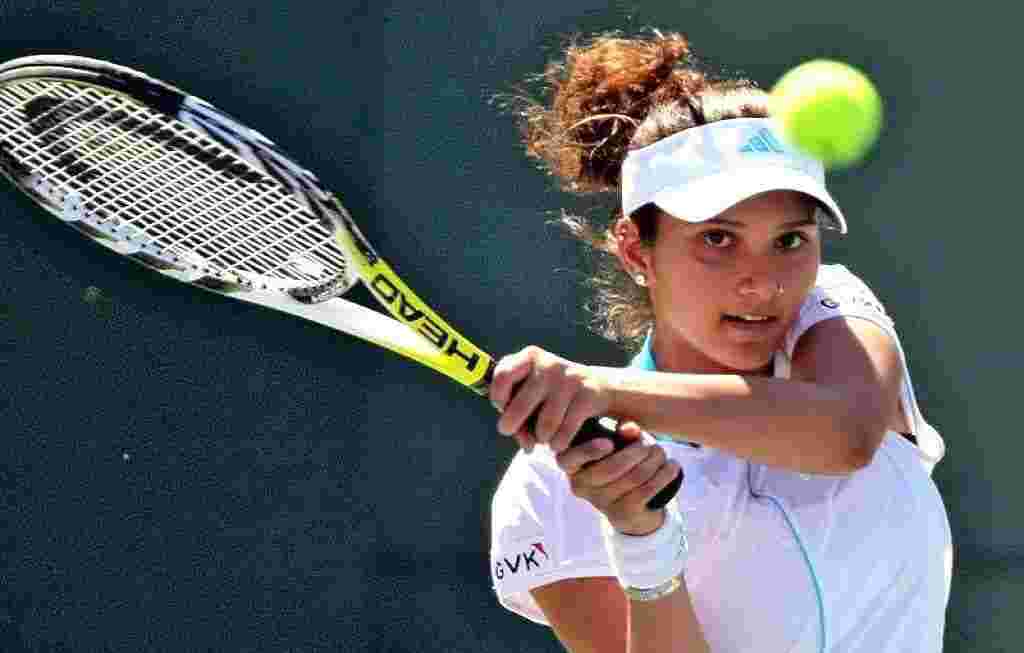 Sania Mirza is India’s most successful female player in lawn tennis, and was named in TIME magazine’s list of 100 Most Influential People in the World this year.

What if you got to know that she started playing tennis just to make good use of her free time during summer holidays? And that too at age 6?

This was just the beginning of Mirza’s career, which was full of failures and setbacks too. And as is the case with every successful sportsperson, Mirza has made her career look fairly smooth, thanks to her grit, guts and glory.

Mirza was born in a family for which playing a sport was more than just a hobby. Her distant relatives had been former cricket captains of India and Pakistan. Even her father had been passionate about playing sports since age 4. So, it was natural for Mirza to be deeply involved in sports.

Mirza’s family moved from Mumbai to Hyderabad when Mirza was a few months old. When she was six years old, she used to go for her swimming class while passing some tennis courts. That was when her mom suggested her to start playing tennis, as Mirza didn’t have much to do at home during her summer holidays. Age was surely by her side. 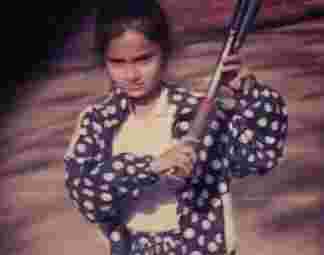 Mirza started playing tennis when she was 6 years old (1992)

Initially Rejected by a Coach; Trained Also by Her Father and CK Bhupathi

The lawn tennis coach to which Mirza was taken was initially reluctant to train Mirza, because she was “too small.” Within a month’s time, though, he realized that he had never seen a player that good, at age 6.

She attended Nasr School and later graduated from St. Mary’s College, which is also the alma mater of famous Indian cricketer VVS Laxman. Mirza was “quite the geek” as she loved studying over playing tennis. It was her headmistress who believed in her talent, and persuaded her to go out and play. By the time she was 12-13 years old, Mirza wanted to take lawn tennis as a full time profession.

She was trained by Roger Anderson,. CK Bhupathi (father of famous Indian tennis player, Mahesh Bhupathi), and her own father, Imran Mirza, who had learned the art of training through the world-class tennis coaches he had met. Mirza’s parents took pride in every game she played, and themselves made several sacrifices during her childhood and teenage.

Mirza was then given a wildcard to play her first WTA tournament, though she lost in the first round. This was followed by another loss at the Qatar Ladies Open, where Mirza was defeated in the first qualifying round. Mirza bounced back by winning four gold medals at the 2003 Afro-Asian Games in her hometown, Hyderabad.

Mirza lost in the first round of the 2004 Hyderabad Open, but went on to win the Doubles title. This was the first WTA doubles title for both Mirza and India. She won 6 ITF titles that year, and was conferred with the Arjuna Award by the government of India for her outstanding achievement in national lawn tennis.

Mirza reached the third round of the 2005 Australian Open, where she was defeated by Serena Williams. She also became the first Indian woman to reach the fourth round of a Grand Slam tournament at the 2005 US Open, before losing to top seed Maria Sharapova. At the Japan Open, Mirza reached the semifinals. With this healthy season in 2005, Mirza was named the WTA Newcomer of the Year. 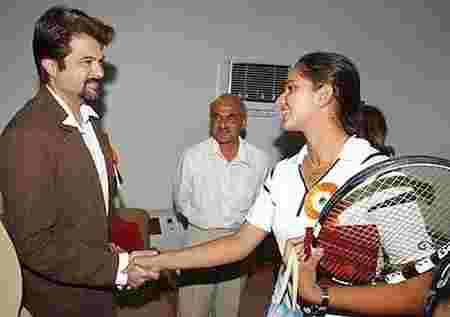 With the 2006 Australian Open, Mirza became the first female Indian to be seeded in a grand slam event, though she was out of the tournament in the second round. She then lost at the Dubai Tennis Championships, to Swiss player Martina Hingis.

Later that year, Mirza couldn’t get through the first round of the 2006 French Open and the 2006 Wimbledon Championships, though she reached the second round of the 2006 US Open. In September, Mirza managed to make it to the semifinals of the Sunfeast Open, eventually losing to top seed Martina Hingis. She won the doubles title with American partner Liezel Huber.

Mirza made it to the quarterfinals of the Tashkent Open (in Uzbekistan) and the Korea Open, where she defeated top seed Martina Hingis. In December, Mirza won three medals (one Gold and two Silver) at the 2006 Doha Asian Games, and ended the year with three wins against the top ten seeds.

Ranked 27 in the World in 2007, the Highest Rank in Her Singles Career

In 2007, Mirza made it the second rounds of the Australian Open, the French Open, and the Wimbledon Championships. She had the best results of her career during the summer hardcourt season, which made her world number 27 in the singles ranking. In the 2007 US Open, she reached the third round.

She fared much better in the doubles, reaching the quarterfinals in the women’s doubles as well as the doubles (with partner Mahesh Bhupathi). She won four doubles titles in 2007, which was her best year as a singles player.

2008 was the year when Sania had to withdraw from a lot of matches due to multiple injuries. She started the year really well as she was the runner-up in the Australian Open mixed doubles, partnering Mahesh Bhupathi. She reached the third round in singles, where she lost to Venus Williams. Mirza then had to withdraw from the French Open and the Pattaya Open. She was defeated in the fourth round at the BNP Paribas Open, and in the second round of the 2008 Wimbledon Championships.

Mirza had to retire from the singles tournament at the 2008 Beijing Olympics due to a wrist injury. She could not play the US Open that year. She made a strong comeback in 2009, by winning her first Grand Slam title at the 2009 Australian Open — the mixed doubles, with Mahesh Bhupathi. In the Pattaya Open, she made it to the finals in singles and the semifinals in doubles.

Mirza’s struggle with injury grew stronger in 2010, as she was unable to win in any tournament. Fortunately, she won the silver and bronze medal at both the 2010 Asian Games and the 2010 Commonwealth Games. She was ranked at 141 at the start of 2011. 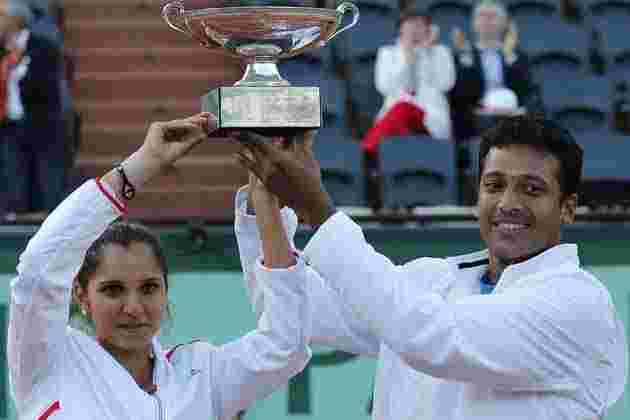 After a series of upsets in the first two months of 2011, Mirza won her first Premier Mandatory title at the BNP Paribas Open (in doubles). She then went on to win the doubles title at the Family Circle Cup with the same partner, Elena Vesnina from Russia. Mirza then went through multiple losses in first rounds, including the one at the 2011 US Open. After playing on the singles circuit regularly throughout the year, she managed to re-enter the top 60 in singles ranking.

In the 2014 Australian Open, Mirza reached the quarterfinals in women’s doubles and the finals in mixed doubles. In the US Open later that year, Mirza lost in the semifinals of the women’s doubles, but went on to win the mixed doubles grand slam with Brazilian player Bruno Soares. This was the third Mixed Doubles title in Mirza’s career. She wrapped up the year with a gold medal and bronze medal at the 17th Asian Games, and with the doubles crown at the WTA Finals (with her friend and partner Cara Black).

In 2015, Mirza was ranked number 6 in the doubles rankings. After short partnerships with various players, Mirza paired up with Swiss legend Martina Hingis. They both won the BNP Paribas Open, the Miami Open and the Family Circle Cup, taking their tally to three successive title wins in a row. They had not lost as a single match since joining forces, and Mirza became the first Indian to be ranked world No. 1 in the WTA doubles rankings.

After a season of mixed results on hardcourt and clay, Mirza and Hingis shined on grass. They won the 2015 Wimbledon Championships, giving Mirza her first Grand Slam title in women’s doubles. Better known as SanTina (a portmanteau for Sania Mirza and Martina Hingis), the pair did not lose a single set against any of their opponents. SanTina, as the top seeds, won the 2015 US Open too, along with the remaining tournaments in that year.

By February 2016, SanTina had a winning 41-match winning streak as they won every tournament on the way, even the Australian Open. But then they lost in the quarterfinals at the Qatar Open, ending their winning streak. Surprisingly, the were also out in the second rounds of the BNP Paribas Open and the Miami Open, being the defending champions of both the titles in the previous year. Mirza and Hingis then decided to take a break, and then came back with a bang at the Italian Open 2016 where they won the women’s doubles title. 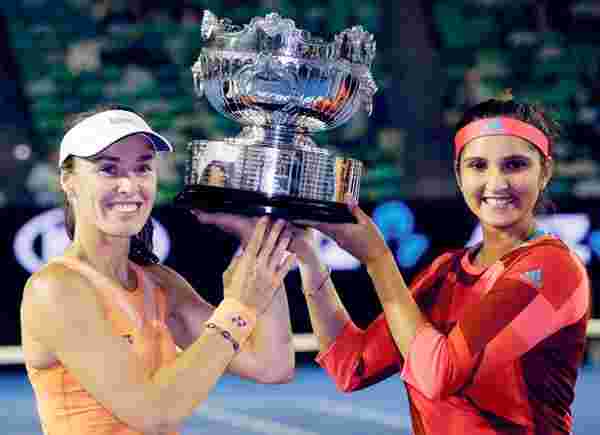 After being conferred with the Padma Shri (by the Indian government) in 2006, Mirza was awarded the Rajiv Gandhi Khel Ratna in 2015, which is the highest sporting honour given by the government of India.  In 2016, Sania Mirza received the Padma Bhushan, becoming the fourth recipient in Indian tennis after Vijay Amritraj, Ramanathan Krishnan and Leander Paes.

The most important lesson we can learn from Mirza’s story is that we have to start early if we intend to succeed at a sports career. There would be a lot of investment of time, energy and even money, but everything would surely pay off if we’re ready to persevere and continuously improve ourself. If we do what we love, our chances of exceeding shoot up exponentially, and hence the money starts flowing too.

Another crucial aspect of Mirza’s story is the importance of having good mentors at the right time in our life, even if they are our parents. Mirza was also great at prioritising what she wanted from her career, as she gave up her singles career to focus (and eventually excel at) her doubles career and become world number 1. In the end, we can learn that every failure and setback is meant to not be feared, but conquered. These become our stepping stones to success.