Blog » Viewpoint » Story-telling is not a mere hobby, but can be a full-fledged career option – Aditi Dewra

Story-telling is not a mere hobby, but can be a full-fledged career option – Aditi Dewra

When we talk about art, we mostly think of painters, dancers, singers or the writers, but forget an important life-art of has been forgotten story-telling.With the advent of the electronic era, story-telling was supposed to be threatened. From the times when children used to sleep after listening to stories from the parents and grandparents, we have moved on the times when children are mostly glued to the screens for digital media. However, it’s a golden opportunity to transmit the knack of story-telling to the new generation and in fact, many story-tellers have digitalised this art to increase the reach. Story-telling can never be forgotten as long as there are people who are firing their imagination daily in the form of words and voices. And to be clear, it is not something that was restrained to grannies, now story-telling as an art form has evolved as a career that is being pursued by several talented youths who are using it as a form of expression and passing on humor, moral, life lessons and what not!

My roots to story-telling were watered from the childhood. I was always given full access to lots of books 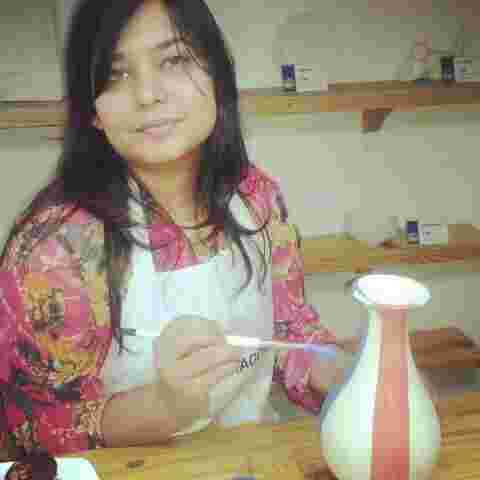 Career Guide’s team recently met one of the inspiring and young story-teller who has been fascinated by this art form since her childhood and now taking to children and their parents as a medium to teach them something useful or bring happiness to their lives. Her name is Aditi Dewra. She is an MBA from De Montfort University, Leicester, UK. She has worked in the USA, the UK and now in India. She has a work experience of more than 7 years and her expertise in business development has made her an important asset to her current company.

Behind this, there is an artist in the form of story-teller. She moulds her imagination and creativity in the way that can find positivity among children and their parents. We were surprised to know how she entered into this field. However, her story from her childhood left us with no surprise. She has always been an avid reader. She remembered her childhood when her grandparents used to have a library and all the children were free to read books, magazines and even subscribe magazines.

She could spend the whole day in that library. Her love for reading transformed slowly into writing and she started participating in competitions. She even competed and won prizes at State level competitions. However, at that time, she did not understand it as a profession and pursued it as a hobby for a long time.

After working in the corporate world for several years, Aditi realized how she can bring happiness to children through her creative writing style. Hence, going forward, she started her Facebook page under the name Ady The story Teller and her own blog on Medium.com under the name of AditiDewra. Since she started, she has received an overwhelming response from her readers and got an instant motivation. She observed that her Facebook page was liked by more than 1200 people in just one week of launching. Aditi has a strength of simplicity and her art clearly speaks of it. It is amazing to see how she turns simple things in her art into interesting stories and this is reaching the hearts of several teenagers and young people also. Her stories are read by a large number of school groups, school going students and their parents.

With a childish excitement, she says that storytelling is not only an art for her but in fact an art therapy. When she is contacted by the people who reads her posts and is appreciated by them, she finds content and happiness. Now, she expects to grow her art form and reach out to the older generation as well.

Aditi is strong of the view that parents should let the imagination of their children be out and expressed. Kids should be encouraged to read a lot and question. It is not necessary that they read some particular genre but they can explore any field that interests them. They can imagine what is not possible and give words to their imagination or express them through different ways of art. She also explains how story-telling has become a proper career field and is no more needed to be considered as a mere hobby.

She explained the fields where there is a huge demand of creative and artistic storytellers. She gives an example of Tamasha movie which is an excellent story-telling compilation. She told that movie making is one of the fields where story-telling is much appreciated and celebrated. Apart from that, advertising fields have a great demand of story-telling for product selling. Behind every video advertisement, there is an imagination and creativity which takes the form of a story.

In addition, story-telling is being used in writing story books for children and works wonders for those who want to begin their career in writing. In fact, there are several workshops, where students are taught the virtue of story-telling for better communication skills and improved creativity. The field has a scope as wide as one can think.

Aditi has a different and a unique streak in her art form which is quite evident by her work on her Facebook page and blog. No wonder, she has received inspiration from the personalities which have themselves gained much appreciation world-wide. Aditi has been inspired by the creativity of Walt Disney. Apart from that, she is also an avid follower of an instapreneur – Aravisdolmenna. Having been inspired by these people, she aspires to grow in this industry and emerge as a full-fledged story-teller. She plans to publish a pattern book for children and parents in near future and carry her own workshops to increase the creativity of children.

We, at CareerGuide.com, wish Aditi the best in her artistic journey of story-telling. We hope that more students get to know about this field and the scope of it in different fields and pursue it as a career. If any student wants to know more about story-telling, they can go to Aditi’s Facebook page and contact her through that.