Futuristic jobs that will make your jaw drop

Video game programmers, smartphone designers, and just about everyone who works on the internet can look back at past works of science fiction to see that their futuristic jobs were predicted in the pages of sci-fi books. This is not uncommon. Sci-fi writers have long been on the cutting edge of science and technology and have created futuristic worlds that included some eerily accurate predictions. Sci-fi writers have been so prescient about the future over the years that companies, governments, and even armies are using these writers to help prepare them for unforeseen threats in the future & futuristic jobs . 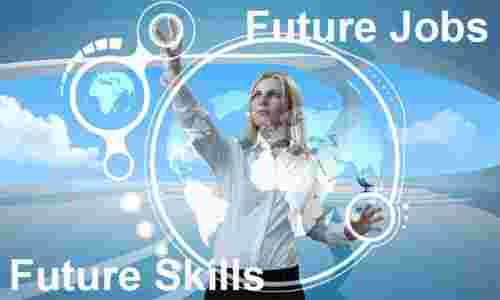 When looking at the jobs of the future, we can turn to these same sci-fi novels and at least get an idea of what may be coming in the next few decades. Some of the industries and ways of working that sci-fi writers have described over the years actually seem quite close to coming true as we enter the 2020s. Here are some futuristic jobs that will make your jaw drop, but that also might be closer than we realize.

This job is basically here although it is not available or needed on a massive scale just yet. Holographic concerts where dead musicians perform to festival crowds have been around for a few years now and it illustrates where this medium could go as it develops. These designers will have to be a combination of a movie director, video editor, and journalist. Holographic designers will have to go find old footage of people (or create new footage of people) and create holographic performances or other types of interactions. This job is very close to being an everyday workplace reality.

Say you are having a baby. Someday soon, you and your partner may sit down with a genetic engineering salesperson and design your baby. You’ll give them brown eyes and black hair and make them tall. You may not have enough for the super-athlete package but the salesperson talks you into getting all the basic disease coverage. Like any other salesperson, this one is likable, friendly, a little aggressive, and good at persuasion and negation. The only difference is that this one is selling genetic modification instead of cars or sofas or houses. You probably won’t have to have a specialized degree for this futuristic job position, just the natural aptitude for sales. As genetic engineering becomes a more common reality, so will the businesses offering these services.

Speaking of genetic engineering, the farmer of the future will look less like Old McDonald and a lot more like the 2015 Nobel Prize-winning astrophysicist Arthur B. McDonald. This is to say that in the near future, farming will not be about physically planting seeds and tilling the land, it will be about mass producing genetically engineered food. This food, developed in a lab, will be able to better meet the world’s food supply needs and help the millions around the world who suffer from food insecurity. On the other hand, it also allows companies to mass-produce low-quality food and sell it cheap for big profits. Whether this new technological development is ultimately a good thing or a bad thing will be determined by the bio-farmers of the future.

When you hop on the 8:15 flight from San Francisco to the Moon, you will want to know that you will have a safe and uneventful flight. That is why space traffic controllers will be so important in the future. Commercial space travel is quite not here in a real way yet but once it gets here, there is a real possibility it explodes just like air travel did in the 1950s. There will be tins of jobs related to this new frontier of travel in addition to space traffic controllers. There will be space pilots, spaceship builders, and repair technicians, even space flight attendants. Learning about the science behind space travel now could pay off huge in the next decade or so as this idea that was once just in sci-fi books is closer than ever.

What if we were able to download all the information from a med school into a robot doctor? How about if we could take all of a person’s brain functions and transfer it to a robotic body that wouldn’t die? These are sci-fi concepts that used to seem crazy but now aren’t that unrealistic. If the concept of transferring data from one entity to another gets as advanced as some science fiction works have surmised, we will need specialists to help facilitate these transfers. Depending on what is being transferred and where it is being transferred to and from, these specialists will need the skills of a data scientist along with those of a computer programmer or maybe even a medical doctor. The possibilities are endless with this profession.

As artificial intelligence (AI) and machine learning get more sophisticated and complex, a world where machines can basically think for themselves and make their own decisions is not as far-fetched as it once seemed. When this happens, as books like Philip K. Dick’s 1968 classic Do Android’s Dream of Electric Sheep? predicted, there is the possibility these machines go off the rails and start doing bad things. In these cases, we will want to make sure we have a tough robot law enforcement system in place to deal with these rouge machines. These new cops who deal with robot-related issues will have to have all the instincts of today’s detectives mixed with a scientific background to know how to stop a machine turned bad.

Professor, technology writer, and futurist Cathy Davidson once theorized that 65% of future jobs not yet been invented. This means that in 10, 20, or 30 years, two out of every three people who read this will have a job that does not exist right now in 2020. This is wild to think about. If you are interested in learning more though about what types of jobs may dominate the future employment market, sci-fi books may be a good place to start. Check out this list of best sci-fi books in 2020 to get inspired about more potential future jobs that may be out there sooner than we think.