Managing and dealing with office politics

For anyone who’s ever held a job, chances are good that you’ve had to deal with office politics at some point in your career. Contrary to popular belief, it’s entirely impossible to avoid dealing with this most pesky of issues.

Unless you plan to be self or unemployed for the rest of your life, you’ll have to deal with office politics at some point or another.

Having dealt with office politics for most of my career, I survived the worst that the corporate world could throw at me and lived to tell the tale.

With all of that in mind, I’d like to share some of the most valuable lessons I’ve learnt with you. 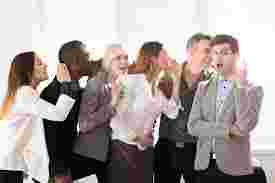 As the old saying goes, “loose lips, sinks ships.” So, you’re out for lunch with your colleagues and talk has shifted to how things are at work. Some of your colleagues start complaining how a particular manager is incompetent and isn’t suited for his new role.

While you may agree with what they have to say, you’re better off keeping your opinions to yourself. Why?

Because the corporate world can be a brutal one and your colleagues are most likely as eager to climb the ladder as you are. The difference?

They don’t have the sense of integrity that you do. Come review time, you’ll find that a particularly nasty comment you made 6 months ago has reached said manager and he’s not happy about it.

This is why you need to avoid water cooler gossip at all costs. Sure, it feels great to vent about a particularly silly manager, but do you really need to do it at the office?

Forget all of that and save your venting for when you’re out with friends who don’t work with you.

The working world can be a bewildering place, filled with all kinds of characters. Most of the time, 99 percent of the people you meet are pleasant, professional and cooperative.

However, there’ll be times when you run into absolutely horrible people who you just love to hate. Their emails are condescending and aggressive and they have all the charms of a flaming cactus.

While you may be tempted to respond in kind, always remember to take the high road and remain polite and courteous at all times.

No, this isn’t some spiel about staying positive while forgiving and forgetting those who’ve wronged you, this is all about maintaining your professional image.

This lends you an aura of professionalism and competency which helps you stand out from the crowd. At the end of the day, you never know who’s watching and it’s always best to have another friend by your side instead of an enemy at the back.

As we’ve said before, office politics can be downright cruel, and you never know who may be looking to get one up on you. It’s like trying to guess the Kentucky Derby winner, just to see your pick fail in the last hurdle.

From what I’ve seen in the past, some of the most competent office politicians were those who were rather incompetent. In an effort to make up for their lack of ability, these politicians often made it their mission to point out the faults of others

This often-meant accusatory emails and plenty of finger-pointing around the office. Instead of descending to their level, focus on doing a good job and minimizing your mistakes. Keep your paperwork tight and make sure your due diligence is done.

Office politics can be one of the most frustrating things to deal with. However, with some foresight and plenty of patience, you’ll be able to protect yourself from it.