There are millions of students studying in tier-2, tier-3 and smaller towns and cities who have no access to any career counselling in their area. These students depend on their teachers and parents for selecting a career, who guide them according to the trends that they have seen in their own cities. However, we believe that if these students are given in-depth counselling after understanding their talents, they can achieve the goals they thought were only the dreams. 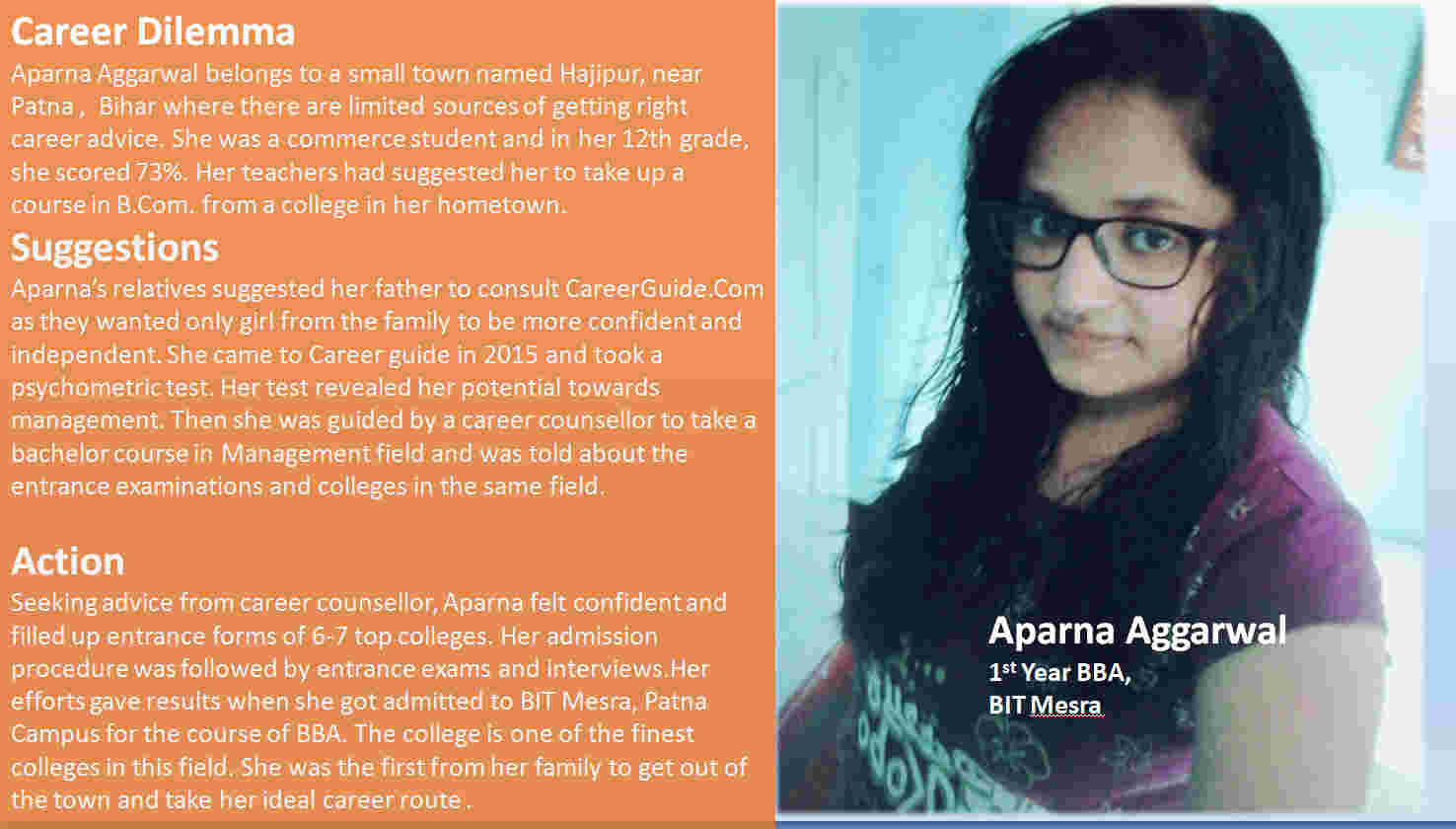 One such student named Aparna Aggarwal achieved her goals and dreams with the help of right career counselling at the right time. She belongs to a small town named Hajipur, near Patna ,  Bihar where there are limited sources of getting right career advice. She was a commerce student and in her 12th grade, she scored 73%. Her teachers had suggested her to take up a course in B.Com. from a college in her hometown, claiming that’s the safest options for girls. Aparna’s relatives suggested her father to consult CareerGuide.Com as they wanted only girl from the family to be more confident and independent

When she came to careerguide.com, she took a psychometric test to figure out her career inclination. Her test revealed her potential towards management. After discussing the aims and goals of Aparna, she was guided by a career counsellor to take a bachelor’s course in Management field. She was also made aware of different courses and competitive exams in this field that would be suitable for her. She was further told about good colleges that she could take admission into and the procedure for taking admission. She was advised on entrance tests and on how to take admission for BBA which suited her interests and calibre.

Seeking advice from career counsellor, Aparna felt confident and filled up entrance forms of 6-7 top colleges. To clear the entrance exams, she prepared for it from career launcher in her state. This gave her further confidence. Her efforts gave results when she got admitted to BIT Mesra, Patna Campus for the course of BBA. The college is one of the finest colleges in this field She was the first from her family to get out of the town and take her ideal career route . Not only she cleared the exam but also gave inspiration to many other students in her town. Her father proudly says that had she not taken career counselling at the right time, she would have been doing B.Com. from a college in her small town. The right career guidance and her talent resulted in a bright future for Aparna. Currently, she is in her first year of BBA course in BIT Mesra and she is confident enough to give her best.

We wish Aparna the best for all her future endeavours and we hope she becomes successful in her journey further!