Blog » Viewpoint » How much Energy is in Me?

How much Energy is in Me? 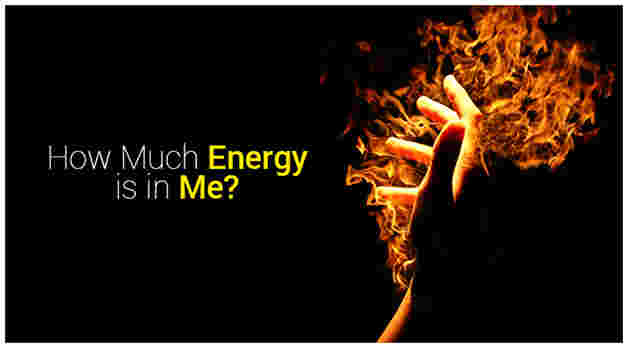 Just Imagine. Open the windows to your grey matter and imagine a, superhero. He has the superpower to convert his body mass into fire energy. The question that we’re going to explore in this post is how much energy would the hero produce in heat form if he burns 50-100 pounds of fat in 5 minutes.

So let’s start playing with the numbers.

The cookie dough in my fridge has 110 Calories when 12 grams of it are served, which gives us an energy density of about 9 Cal/g. As the pound has around 450 grams, 1 pound of can contain around 4050 Calories.

in increasing the temperature by 20°C!

To increase the dynamic impact of this article, let’s use a different comparison. We will be using joule which is another unit for energy. The light bulb that we use needs power of around 60 watts and what is watt but one joule per second. Thus, the amount of power it needs is 60 joules per second. We calculate the energy to be around 17 million joules in 1lb of fat that is pure or 4050 Calories. When applied to sixty pounds of fat the energy we get is billion joules.

A billion joules is equivalent to a quarter ton TNT bomb. The video below shows a TNT bomb of one tone exploding. Just scale it down a bit in your imagination (I know we’ve used a lot of that in this post) and you’ll have a good example of what our superheroes powers are going to look like.

As the initial problem had a time span of 5 minutes attached to it, we’ll try to apply it into the situation by dividing the billion joules with the seconds the process goes on for:

Around 3.3 MW, this number is equivalent to the amount of power that it takes to light 55,000 light bulbs simultaneously!

The post tried to explore the unchartered territory of a fun numerical approach towards physics and tries to demonstrate that math when applied to fun thought process yields pretty satisfying results. This approach is what we try to explore in all our content at Byju’s. Visit our website to learn more!